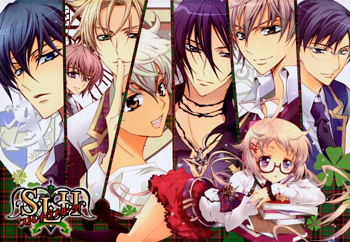 Hiyoki and her boys.
"On the night of my 16th birthday, I had a dream. Or was it… a nightmare? But I know one thing for sure. That night… I lost my heart."
Advertisement:

From the author of Kiss of the Rose Princess comes Stray Love Hearts, a Shoujo manga about Hiyoki Kozue, a girl who literally has her heart stolen from her in a dream by a mysterious boy with a tattoo. While looking through a pamphlet for St. Nazareth Academy, she discovers that the crest for one of the school's dorms, S-Hall, looks just like the thief's tattoo, and so she decides to transfer there, hoping to find him and reclaim her heart.

Once there, she learns that she has the ability to look inside the dreams of others by sleeping beside them, and since people can appear differently in dreams than they do in the real world, she must rely on this power to determine if any of the six different boys living in S-Hall are the person who took her heart. The quickest way to do that? Living with each of them for a week, of course!