One of the most important aspects of David Bowie's work in The '70s was his creation of stage personas as vehicles for his songs via Alter-Ego Acting Type 3 (the persona as a different self of the performer). While he eventually put these behind him in favor of performing "as himself", knowledge of them and their tropes is important to understanding a significant chunk of his career. In addition, other songs and music videos have characters of their own that have proven trope-worthy, and/or are frequently mentioned in pop culture.

For characters from Bowie's dramatic film work (The Man Who Fell to Earth, Labyrinth, etc.), tropers are directed to the individual pages for said films.

open/close all folders
The Saga of Major Tom

Bowie's first hit (though not his Breakthrough Hit, which would be 1972's "Starman") was "Space Oddity", a 1969 number that told the sad tale of ill-fated astronaut Major Tom. In 1980, the Scary Monsters (And Super Creeps) song "Ashes to Ashes" would expand upon this story, not only by continuing it but suggesting that it was more complex than originally presented. The remix of 1. Outside's "Hallo Spaceboy" (1996) featuring the group Pet Shop Boys includes a bridge that mentions Major Tom once more. Finally, Major Tom possibly appears as a long-dead corpse in the music video for "Blackstar," from the 2016 album of the same name, wherein a cult springs up over the worship of his bejeweled skull.

Major Tom's story has proven well-known enough to be reinterpreted by other parties, as in Peter Schilling's 1983 song "Major Tom (Coming Home)" and, in a far more irreverent manner, The Venture Bros. Season One episode "Ghosts of the Sargasso". The good Major warrants a page at Wikipedia

that runs down the many references to him in pop culture.

Though I'm passed one hundred thousand miles, I'm feeling very still...
An astronaut on a solo mission, he loses contact with Ground Control shortly after asking them to tell his wife he loves her, and drifts off into the depths of space. The song leaves the listener to decide if a simple accident caused this disaster, or if he voluntarily decided to abandon Earth. In "Ashes to Ashes", Ground Control receives word from him again, but the song goes on to suggest that Major Tom is actually a drug addict whose journeys are metaphorical and who is trying to sober up. This could be read either as a suggestion that his space exploration was a hallucination, or perhaps that his drug problem rose from trying to cope with his near-death experience in space. 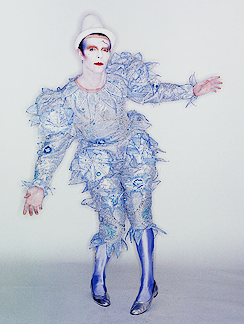 "Space Oddity" is a dialogue between two parties — Ground Control and Major Tom — and "Ashes to Ashes" is also sung by two characters. But while Major Tom is back, this time the other singer is someone who "heard a rumor from Ground Control" about Tom's return. In the music video, a Concept Video with surreal imagery, the unnamed party is visualized as a mysterious Pierrot clown. While not as famous as Major Tom, Pierrot is another Bowie character occasionally invoked in pop culture, such as the TV series named for the song and set in 1980, Ashes to Ashes (2008). A life-sized puppet Pierrot is featured prominently in the 2013 video for "Love Is Lost". 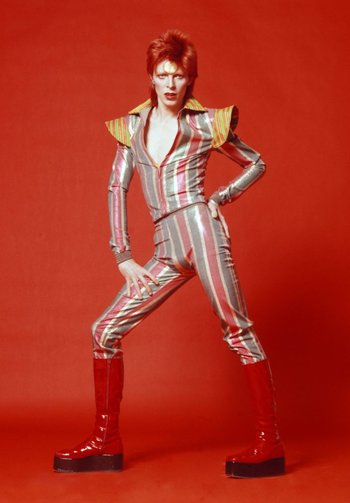 Bowie's breakout character — an androgynous, bisexual rock star (either from Mars or an Earthling Touched by Vorlons; Bowie flip-flopped on the plot of this Concept Album) who becomes a universally adored sensation in the final five years of Earth's existence. The adoration goes to his head by the time he dies at the hands of his own fans. 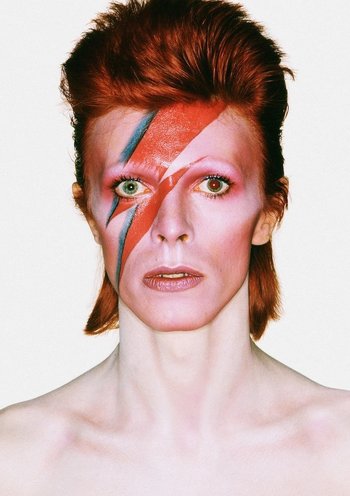 Bowie's follow-up to Ziggy Stardust was a Spiritual Successor. Owing to Bowie's concern that the character of Ziggy was overwhelming him, Aladdin Sane is a Concept Album focusing on the fall of a faux-Ziggy as he travels through America, reflecting the fact that Bowie wrote the bulk of the songs during a tour of the U.S. The album was released prior to Bowie returning to the U.K. for the final leg of touring as Ziggy. 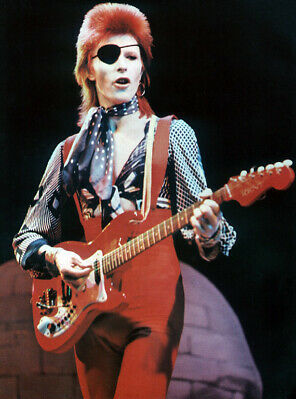 A character mentioned in the title track of Diamond Dogs as "a real cool cat/[who] lives on top of Manhattan Chase" in an After the End Dystopia, his name is generally used to describe the persona Bowie assumed for the followup tour, which was set in the album's "Hunger City". Bowie doesn't seem to have regarded it as a true persona, however. 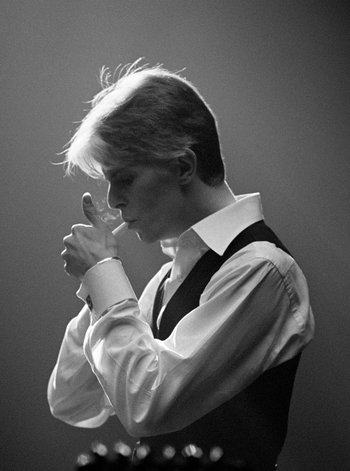 From Station to Station and the subsequent Isolar tour (1976)

After Bowie played the Alien Among Us Thomas Jerome Newton in The Man Who Fell to Earth, he took the look and stoic nature of Newton and merged it with Fascist, Nazi, and occult ideologies to create the darkest of his stage personas: a heartless, decadent, cocaine-addicted European who is struggling to understand concepts such as love and God. So much of this character reflected Bowie's real problems (particularly with drugs) at the time that as he struggled to address them afterward, he realized he could no longer practice Alter-Ego Acting as a musician. Ironically, given the character's dark nature, "The Thin White Duke" is often used as a simple nickname for Bowie now; more appropriately, this look is the primary reference for how Bowie is portrayed in The Venture Bros.. In 2013, a life-sized puppet version of the Duke appeared in Bowie's Surreal Music Video "Love Is Lost". 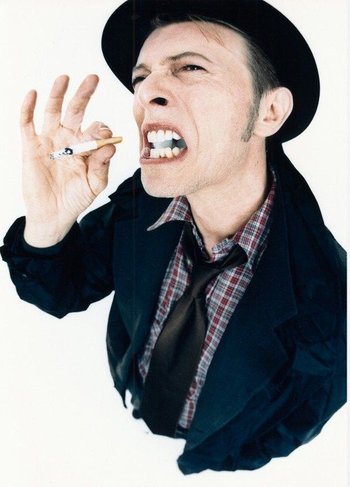 The main protagonist of Bowie's 1995 rock opera 1. Outside, Nathan Adler is a gruff detective tasked with investigating the events leading up to the murder of the 14-year "Baby" Grace. The album itself is considered to be a series of "diary entries" written by Adler himself as he undertakes the task. Like Halloween Jack, Bowie defined Adler as more of a character as opposed to a proper persona, though he does dress up as Adler in the photoshoot for the album.
Jazzin' for Blue Jean

Bowie's entry into the long-form Concept Video sweepstakes that followed on from Michael Jackson's Thriller was 1984's Jazzin' for Blue Jean, a 20-minute effort that played in U.K. cinemas before The Company of Wolves and on TV and home video elsewhere. The story is a simple farce. Working-class guy Vic, trying to impress the girl of his dreams (referred to as "Dream" in the end credits, as there's No Name Given otherwise), tells a Celebrity Lie to her — namely that he knows the rock star Screamin' Lord Byron, who's about to be making a one-night-only appearance at a London club. Now he has to introduce her to him. The twist in the telling is that Bowie plays both men.