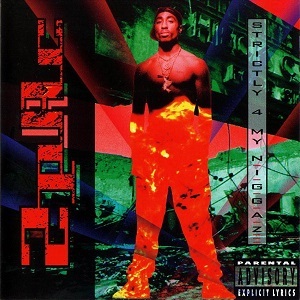 Mr. Fuck-a-Cop is back!
Here we go, turn it up, let's start
From block to block, we snatchin' hearts and jackin' marks
And the punk police can't fade me, and maybe
We can have peace someday, G

The album finds 2Pac in a different place than his debut, after facing criticism over his more violent lyrics, starring in the movie Poetic Justice with Janet Jackson (with tensions on set), having run-ins with the law, and generally becoming a rising star in the hip-hop scene. Most of the lyricism on Strictly 4... involves 2Pac venting his frustrations with the problems in his life and coming to terms with his rising fame and controversy, making it a more personal and introspective album than his debut. That said, he still finds time to address social/political problems faced by the black community at the time, such as deadbeat fathers and the treatment of women.

Strictly 4... is generally considered the album where 2Pac broke through to the mainstream. It spawned four singles; "Holler If Ya Hear Me", "I Get Around", "Keep Ya Head Up" and "Papa'z Song". "I Get Around" and "Keep Ya Head Up" in particular were his earliest big crossover hits, helping propel him to superstardom not just in the hip-hop scene, but pop culture as a whole.