Film / On Any Sunday 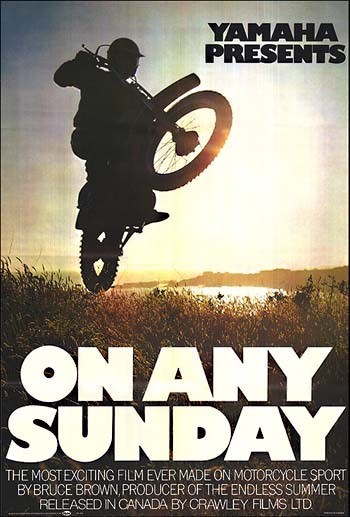 On Any Sunday is a 1971 feature film directed by Bruce Bowen.

It is a documentary about motorcycle sports. Many different types of motorcycle races and events are shown: time trials, desert races, multi-day cross country marathons, motocross, regular old races on closed tracks, and oddball events like sidecar racing and racing on ice. Two motorcycle riders receive the most attention in the film. The first part of the film concentrates on Mert Lawwill, who specialized in dirt-track racing (and unlike many of the other cyclists in this film was a full-time racer). The second part of the film mostly follows Malcolm Smith, who was an off-road racer, and is shown competing in the International Six Days Trial.

Steve McQueen, a motorcycle enthusiast (he insisted on a motorcycle scene in The Great Escape) and amateur racer, produced the film. He pops up on screen several times, including as a racer in the Lake Elsinore Grand Prix. (He finished 11th.)