Recap / The Simpsons S6E20 "Two Dozen and One Greyhounds" 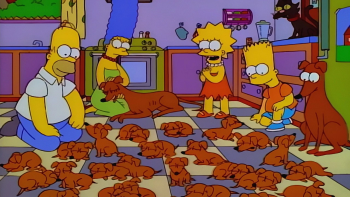 In this parody of 101 Dalmatians, Santa's Little Helper cuts a destructive path across the Simpson house, which leads him to the dog track where Homer and Bart first found him. There he becomes mates with a female racing dog named "She's The Fastest" and fathers 25 greyhound pups. Mr. Burns adopts the puppies, but Bart and Lisa suspect he has nefarious plans.