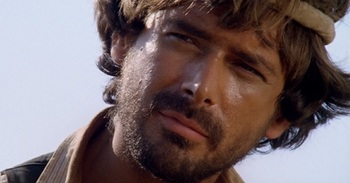 Milian in the mid-70s
Advertisement:

Tomás Quintín Rodriguez-Varona Milian Salinas De La Fé y Alvarez De La Campa (3 March 1933 – 22 March 2017), better known as Tomas Milian, was a Cuban-born actor and singer who spent most his career in Italy in the 1960s and 1970s, equally at home in arthouse and genre B-movies.

Though born and raised in Havana and educated in New York City, Milian became something of an Italian cultural icon for his roles in Spaghetti Western and poliziotteschi (Italian action-crime) films, often playing wisecracking police officers and impassioned criminals whom Italian audiences could closely identify with. It helped that he had a strong command of accents and local slang, often writing his own dialogue in romanesco (Roman dialect), which helped endear him to local audiences.

He later returned to the U.S., where he starred in JFK, Amistad, and Traffic.