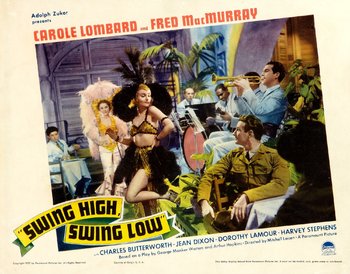 Swing High, Swing Low (1937) is a romantic drama starring Carole Lombard and Fred MacMurray, the third pairing between the two stars. It was directed by Mitchell Leisen and is based on the Broadway play, Burlesque.
Advertisement:

In Panama, former soldier Skid Johnson (MacMurray) and Maggie King (Lombard) meet and decide to live together merely out of convenience. During her stay, Maggie finds out that Skid is an incredible trumpet player, so she gets him a nightclub job to showcase his skills. Eventually, they fall in love and become a successful act. In this dingy club, an NYC music promoter spots Skid and offers him a job back in the States. Maggie pushes Skid to accept the job alongside bluesy singer, Anita Alvarez (Dorothy Lamour), so he goes and promises to send money to bring Maggie back to America. However, the day never comes; Skid becomes famous and distracted, making promises he never keeps.

None of Maggie's letters get proper replies, so she borrows money and flies over to find out that Skid has been cheating on her with Anita. Heartbroken, she files for divorce and moves on. This comes out of left field for Skid, so he descends into despair and neglects his talent, leaving Maggie with the choice to either help Skid recover or marry someone else.

This film was never renewed for copyright, so it's available for free