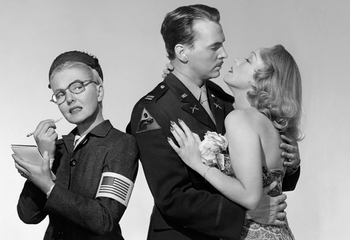 Congresswoman Phoebe Frost (Arthur), alongside an American committee, is sent to check the morale of American soldiers in occupied Germany. To her dismay, men are fraternizing with the local women, they trade in the black market, and go to dumpy dives for entertainment. Even more disconcerting is the fact that a prominent Nazi's former lover, Erika von Schlütow (Dietrich), is now a nightclub singer who entertains these soldiers.

Unbeknownst to Frost, she's also consorting with Captain John Pringle (Lund). Frost finds out that Schlütow is with an American officer, but not which one. To hide his identity as Schlütow's lover, Pringle goes along with Frost as she tries to find the mystery man.

One thing leads to another, and Pringle has to pretend to be attached to Congresswoman Frost, making things unfold from there.