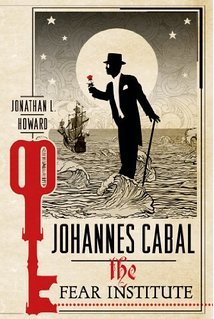 Cabal does The Dream Cycle
Advertisement:

The third book in the Johannes Cabal series, The Fear Institute continues the Genre Shift style of the series by combining Howard's style with that of Lovecraft in a more explicit way than the other books, which all show Lovecraftian influence. The Fear Institute is a secret society determined to destroy fear-they believe it has a source, called the Phobic Animus which can be found in The Dreamlands. To this end they seek out Cabal, necromancer of some little infamy to help them as he has a reputation for being competent and well-versed with the occult.

Cabal agrees, mostly because the three Institute members who seek him out have the Silver Key which can get him into The Dreamlands and he's always wanted to go for scientific research. A dangerous journey, fraught with peril, monsters, and zebras commences leading Cabal to face something worse than the Devil himself.

Johannes Cabal: The Fear Institute has examples of: