Ride / Frozen Ever After 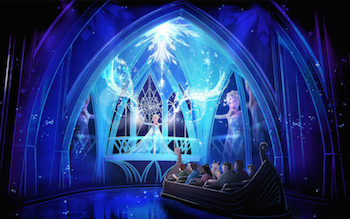 Frozen Ever After is a Disney Theme Parks attraction based on Disney's 2013 release Frozen. It opened at EPCOT in 2016, replacing the Norway pavilion's Maelstrom attraction.

The attraction has guests boarding boats and setting sail on a voyage to Arendelle. To celebrate the day Princess Anna saved Queen Elsa, Elsa has declared a "Summer Snow Day Celebration" with a reception in the ice palace.

Later, it was announced that a copy of the attraction will open at Hong Kong Disneyland in 2020.

Frozen Ever After provides examples of: