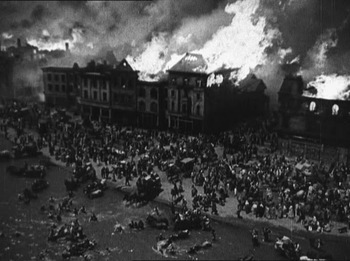 It is loosely inspired by the Great Chicago Fire

of 1871. The O'Leary family, consisting of a widow and her three young sons, arrive in the booming city of Chicago in 1854. Molly O'Leary starts a laundry business. Her son Jack (Ameche) becomes a crusading lawyer. Another son, Dion (Power), is a ne'er-do-well gambler, who falls in love with dance hall singer Belle Fawcett (Faye).

Through some luck Dion gains insider info about where a rail line in the city will be built. He and Belle build a saloon there, much to the disapproval of Dion's straight-laced mother. Dion builds an empire based on bribery and corruption in business and politics in direct competition with Gil Warren (Brian Donlevy), a similar crook. Gil offers to join forces with Dion if Dion will help him get elected mayor. Instead Dion backs his brother—which leads to conflict when Jack embarks on his crusade to clean up the city.

Then there's a big fire.

Jean Harlow was slated to star in this film before her untimely death from kidney failure. Her replacement Alice Faye became a big star. Power, Faye, and Ameche were teamed up again right after this in Alexander's Ragtime Band.