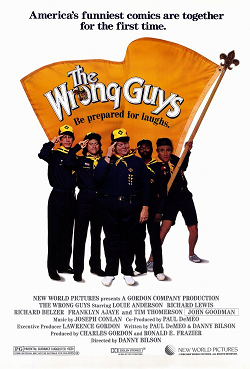 "When I was a kid, the sky was blue, the lawns were green, and the Buicks? Well, they were two-toned. Every Wednesday, the guys would gather at my house for our Cub Scout meeting. We were Den 7, the Owl Patrol."
— Louie Anderson's opening narration
Advertisement:

In 1961, Louie, Richard, Belz, Franklin and Tim were close friends, all serving in the same Cub Scout troop (Den 7, Pack 18). As time passed, they went their separate ways - Louie is a kind-hearted man who still lives with his mother, Richard is now a neurotic dentist, Belz is an accesory designer specializing in belts, Franklin is a radio self-help guru, and Tim is a surf bum with a New Age girlfriend. At the insistence of Louie's mom, he organizes a reunion with his friends: a weekend camping trip at the site of their troop's greatest failure, Mt. Whitehead. Back in '61, the troop got hopelessly lost, leading to embarassment when their parents had to be called to find them. This trip is an attempt to prove to themselves that they can beat the mountain.

Unfortunately for them, their childhood bullies the Grunski brothers (who were drummed out of Den 7 for, among other things, shaving Louie's dog), have followed them along to give them their own brand of nostalgia. It gets even worse when escaped convict Duke Earle mistakes the guys for FBI agents hunting him down, and the reunion becomes a bullet-dodging run for their lives.

Tropes featured in The Wrong Guys include: