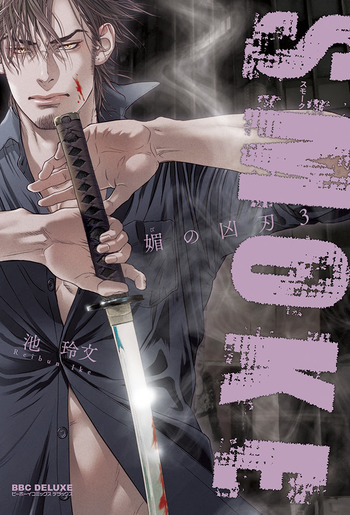 Bi no Kyoujin (媚の凶刃) is an explicit Boys' Love manga written and drawn by Ike Reibun from 2012 to 2016. It is a 5 volumes story composed of the main trilogy and its prequel Bi no Isu and a collection of side-stories named X-side.

Nariaki Kabu is the heir to his clan and handles confidently his job as a Yakuza, engaging in high-profile drug deals, assassinations, prostitution, gambling money and all kinds of other illicit activities. During a punitive expedition, he comes across a young delinquent named You Nirasawa, who managed to fool his men of their money but ended up captured and tortured. As Nirasawa demonstrates uncanny skills with drug-dealing and smuggling, Kabu becomes more and more interested in the defiant young man and patches him up, grooming him into his personal Battle Butler and second-in-command. Quickly, the relationship turns intimate as Nirasawa becomes completely devoted to Kabu who feels a strange attraction to his underling that he doesn't quite explain himself. But can such a relationship exist in a setting where love is but a dangerous luxury, especially between two men?

The series has been released stateside and in Europe in 2018, with Smoke as its last volume, along with X-side.