Fanfic / The Mixed-Up Life of Brad 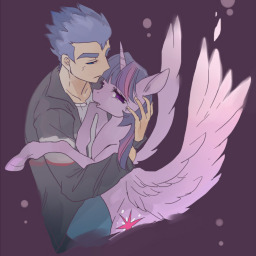 The Mixed-Up Life of Brad
Advertisement:

The Mixed-Up Life of Brad

is a My Little Pony: Friendship Is Magic fanfic by DGD Davidson (originally based loosely on the trailer and fan speculation for then-upcoming My Little Pony: Equestria Girls).

Brad is a teenaged boy in love with the adorably awkward girl, Twilight. So much, in fact, that when she reveals that she's actually a pony princess from another world, he agrees to follow her back into Equestria so that they may live together as ponies forever.

Things don't go so well, however. For one, Brad unexpectedly remains human after passing through the portal—and to make things worse, Twilight is now technically guilty of seducing and kidnapping a citizen of a foreign nation.

A more or less light-spirited romance fic with a worldbuilding element. Warning — some Equestria Girls spoilers within.

The Mixed-Up Tropes of Brad: