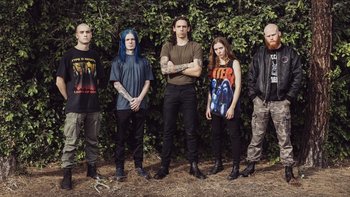 Code Orange (previously known as Code Orange Kids) is an American hardcore punk/beatdown/entombedcore/sludge metal/whatevertheyfeellike band that formed in Pittsburgh, Pennsylvania in 2008. The band signed to Deathwish Inc. for their first two studio albums Love Is Love/Return to Dust (2012) and I Am King (2014) and have since released a third, Forever (2017), through Roadrunner Records. The fourth full-length album, Underneath (2020), was made available on March 13th.