What Could Have Been / Western Animation 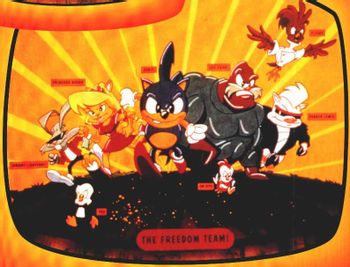 Apparently "Freedom Fighters" didn't sound cool enough.note The only character to not have gotten a radical look-transformation once the show finally started production was Sonic.

Advertisement:
open/close all folders
Cartoon Network
Advertisement:
Based on DC Comics
The DC Animated Universe had quite a few things like this, given its long length and famous run-ins with characters being Exiled from Continuity and Executive Meddling:
Disney
Hanna-Barbera
Hanna-Barbera was a studio famous for a wide variety of ideas getting greenlighted, but a lot more got changed along the way.
Based on Marvel Comics
Nickelodeon
Advertisement:
PBS Kids
Star Wars
Transformers
Warner Bros.
Miscellaneous