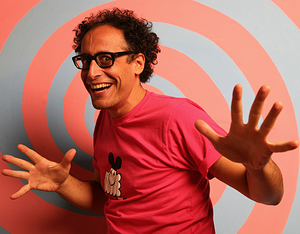 "Each day I work at Stretch Films, I ask myself "why?". And then an anvil lands on my head!"
— John R. Dilworth
Advertisement:

Jonathan Russell Dilworth (born February 14, 1963), known affectionally as Dilly, is a New York City-based independent animator, whose work has been featured on various different sources throughout his career, including Nickelodeon, Cartoon Network, MTV, and PBS, as well as a number of film festivals across the globe. The name of his animation studio is Stretch Films, Inc.

Dilworth's claim to fame is perhaps the popular Cartoon Network animated series, Courage the Cowardly Dog, which ran from 1999 to 2002, as was based on his Academy Award-nominated short, The Chicken from Outer Space, though he also has a steady cult following of his own, for his wildly imaginative and distinctive-looking animation style, as well as his bizarre and insane storytelling. Dilworth also doesn't limit himself to any specific style of animation, although he usually animates by hand, he's also dabbled in Limited Animation, Claymation, Stop Motion, CGI, and Flash.

Dilworth's catalog of films, shorts, pilots, and series are as follows:

Tropes associated with Dilworth and his work