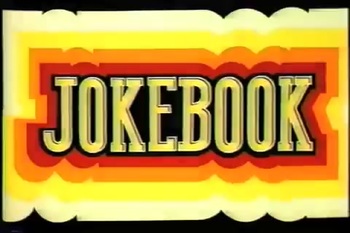 Jokebook is a short-lived Prime Time Cartoon produced by Hanna-Barbera for NBC in 1982.

The series is an Animated Anthology featuring animated comedy sketches produced by longtime HB associate Harry Love and directed by veteran HB director Marty Murphy, featuring a small assortment of recurring characters, as well as numerous one-off sketches. The humor in these sketches is, at times, noticeably spicier than HB's usual fare due to its being target to adults, which obviously meant the writers had a lot more leeway.

Additionally, due to production issues, Jokebook also provided national broadcasts for independent and student films, most notably an appearance by Ted Petok's Academy Award-winning The Crunch Bird in the first episode. Both original and acquired material were fitted with Hanna-Barbera's infamous Laugh Track, which was being phased out by this point; Jokebook wound up being the final HB production to use it.

Due a combination of the aforementioned production issues (as detailed

by former HB employee Tom Ruegger), Invisible Advertising, a Spring premiere date, and competition from Benson and The Dukes of Hazzard, the series wound up being an utter rating failure (the second episode ranking dead last among that week's shows), causing it to be unceremoniously pulled after three out of a planned seven episodes. The series immediately faded into even further obscurity, never rerunning anywhere, and only the first episode and the theme song, sung by Scatman Crothers, are available online.