Western Animation / Diseasy Does It 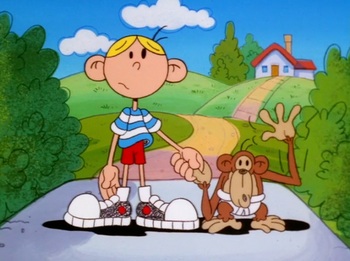 Diseasy Does It (Or, Chimp 'n' Pox), was supposed to have been the pilot for another series planned by Mr. Warburton, Kenny and the Chimp.

In this short, a young boy named Kenny and his pet ape Chimpy are asked to organize the lab of one Professor XXXL! Two things; one, the lab is full of dangerous diseases, and two, Professor XXXL thinks Chimpy is Kenny's brother, and thus the most trustworthy to handle the diseases. Naturally, Hilarity Ensues.

While the series was never picked up, Professor XXXL would become a recurring character on Mr. Warburton's other series, Codename: Kids Next Door. The short would later become included on an episode with the pilot No P in the OOL and proper episode "Operation: C.A.K.E.D."

Alternative Title(s): Kenny And The Chimp