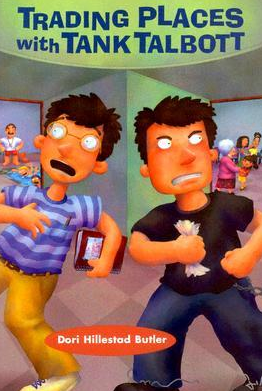 A book by Dori Hillestad Butler, about two very different boys who strike a deal. According to the blurb on the back of the book:

"All Jason Pfeiffer wants to do is finish his horror-movie script about his sister, but lately his life is full of horrors! His parents are making him take swimming lessons at the recreation center—and there's nothing that Jason hates more than taking off his glasses and putting his face in the water. Except maybe having to deal with Tank Talbott.

All Tank Talbott ever wants to do is beat people up. (At least, that's what Jason thinks.) But Tank's at the rec center, too—because his parents are making him take ballroom dance classes! There's nothing that Tank hates more than dancing with girls—except maybe being mistaken for a dork face like Jason. But that's just what gives Jason a brilliant idea—trading places! The mismatched pair make the switch, and along the way, they learn some surprising things about friendship and courage."

A follow-up novel, Tank Talbott's Guide to Girls, delves deeper into Tank's home life, which was hinted at in the first book as being... unpleasant.