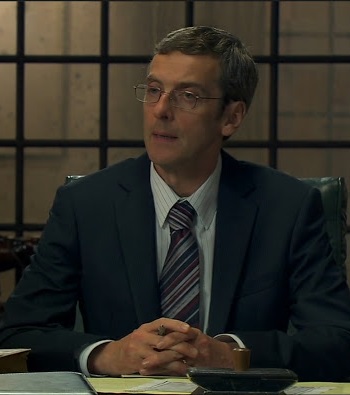 Hey... you look quite familiar...
"WE ARE COMING."
— Millions of children all over the world ages five to eleven
Advertisement:

In 1965, a busload of children are taken out into the middle of nowhere in Scotland. Eleven of them walk towards a mysterious white light - but a twelfth, a young boy, runs away scared for his life.

Present Day. Children start standing eerily still and staring vacantly off into the distance, but the incident ends just as fast as it begin and the children have no recollection of it. Gwen notices this while withdrawing money from a cash machine in Cardiff and goes to the Hub to investigate (blowing a kiss to a photo of dearly departed teammates and friends Owen and Tosh in her office workspace), discovering it's happened all over the United Kingdom (and later confirming all over the world, at the exact same time). Meanwhile, Jack and Ianto investigate a death by alien parasite, and pass themselves off as the victim's nice gay neighbours in order to get close to the corpse. They get caught by Dr. Rupesh Patanjali, and when he realises that they're alien-hunters, he asks them to help them figure out why corpses have gone missing. Since they need a new doctor in Torchwood, Gwen, Ianto and Jack subtly lead him to the Hub to see if he'd be a good addition for the team.

However, before they get anywhere, all children aged five to eleven on the entire planet start chanting in unison. "We. We are. We are coming." They all chant in English, too, and Rhys notices that their chanting is timed with British school commutes and lunch breaks. Jack calls UNIT for help, but Martha Jones is on her honeymoon and no-one's co-operating very much.

One elderly man, Clement McDonald, is also chanting along. Gwen goes to visit him in the East Grinstead hospital he's in, and since he was Touched by Vorlons as a young boy, he's able to tell her that she's pregnant.

In London, Home Office Permanent Secretary John Frobisher is worried about his children. He's even more worried when he realises that he knows exactly what aliens might be behind this: unseen monsters that appeared on radio frequency 456 many years before. And that his job, in the words of Prime Minister Green, makes him a nice public face... and expendable. His new secretary, Lois Habiba, is having a very confusing first day, and his weary personal assistant, Bridget Spears, tries to make sense of it all. Green gives Frobisher a "blank page", that everyone involved with the 456 in 1965 is to be killed to prevent knowledge of the prior encounter from being made public. One of the names on the list? Jack Harkness.

Ianto is a bit bothered by appearing as Jack's boyfriend in public. Jack doesn't see the issue — they are a couple. Worried about the children, Ianto visits his sister to check on his niece and nephew, and is unexpectedly coaxed out of the closet by her after a friend of hers had seen Ianto with Jack at a restaurant. He explains that it's "not all men, just Jack". That he's not sure what it is yet. That's he's not broadcasting it to the world. Jack visits family too: his daughter Alice, who is very happy being a regular middle-aged single mum and not having any aliens in her life. Unlike Jack, Alice is not immortal and ages normally, she already looks older than her father. She'd rather not have her dad in her life too much either, as it would only confuse her son (who thinks Jack is his uncle).

Dr. Rupesh Patanjali turns out to have been a mole, and he's ordered by the government's local anti-terrorist squad (led by Agent Johnson, who, as Andy remarks, is pretty hot) to kill Jack. Rupesh does, and Agent Johnson plants a bomb in Jack's stomach. They believe the Torchwood Hub is somehow linked to Jack's immortality, so they plan to blow the place up with Jack inside it. Johnson kills Rupesh to stop him from talking, and leaves his dead body next to Jack's. Jack wakes up shortly afterwards, notices Rupesh's body and heads back to the Hub.

Gwen takes a quick pregnancy test at the Hub, and finds out that Clem was right. She's three weeks pregnant. Jack puts his hand on hers when he congratulates her. The automatic scanner immediately shows the bomb inside him. Gwen races out, Ianto passionately kisses Jack goodbye, and Jack stays behind to let the bomb explode inside him — destroying the Hub completely. Fridge Horror abounds - all that cool alien tech they had is toast, Janet and all the Weevils in lock-up have probably been turned to puppy chow, along with the bodies in the morgue (maybe not Gray - we never saw exactly where he ended up; otherwise, Jack just lost his brother for good), and if Myfawny ever pays a visit to her old stomping grounds, all she'll find now is a burnt out hole in the ground. And while all of this is happening, all the children have once again begun to repeat the words, but their final repetition adds a new one.