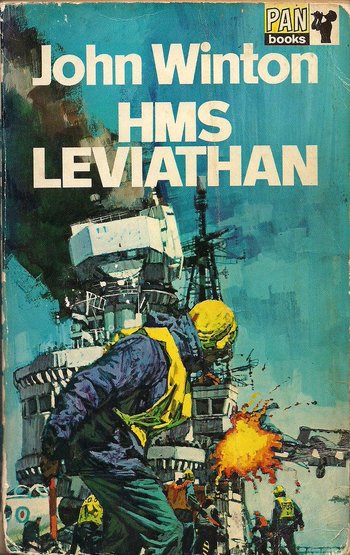 This ship has a mind of her own

"Can you draw out Leviathan with a fishhook or press down his tongue with a cord? Can you put a rope in his nose or pierce his jaw with a hook? Will he make many pleas to you? Will he speak to you soft words? Will he make a covenant with you to take him for your servant forever? Will you play with him as with a bird, or will you put him on a leash for your girls?"
— The Bible (Job 41)

This novel of the
Advertisement:
Royal Navy in peacetime, something of a tragi-comedy, was written by ex-Navy officer John Winton and was published in 1967. It is set in a time where Great Britain might still be able - just about - to call herself a world power with genuinely global reach, but the last of Empire is ebbing fast. The British government, perhaps in a fit of hubris, has commsssioned the largest warship ever built for the Royal Navy - the truly massive aircraft carrier HMS Leviathan. With nearly two thousand crewmen aboard, it is almost a floating city, or at least a small town with its own airport. The snag is, it is so Herculanean a prospect that its first shakedown cruise proved to be a humiliating failure marked by disasters and ill-feeling. It may be too much for one Captain to completely administer and call his own, a massive white elephant that nobody can make work.Enter Commander Robert Markready, an old-school career Navy officer, who is tasked, as ship's commander and second only to the Captain, with gelling together those two thousand men, getting them to a peak of efficiency, and making Leviathan into a ship, and a ship's company, to be proud of. He sets about his task with a mixture of his long Navy experience, and some astute persuasion and diplomacy - but also a tendency not to truly understand people, and to get things dead wrong in his one-to-one dealings with people. He discovers there are two Royal Navies. The one he joined in the late 1930's and fought WW2 in. And the new Navy of the 1960's, which inevitably reflects the socially more liberal, questioning and permissive 1960's. An old-time "fish-head" with no previous service in carriers, Markready realises too late that his utter inability to understand pilots and aircrew, and the way he progressively alienates young pilots of The '60s' generation with his The '30s outlook and wartime understanding of the Navy, is going to destroy both his seagoing career and his future prospects in the navy.

Ahoy! Tropes on the quarterdeck!