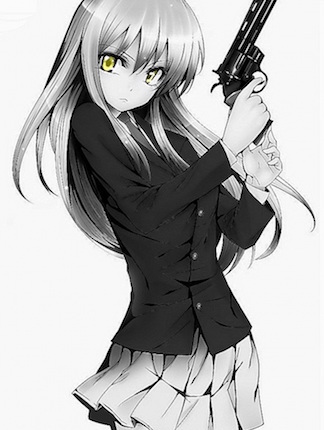 is a complete fanfiction that follows the adventure of a girl named Alice, who leads an non-eventful life in our world, she even has gray hair and gray eyes to match her nearly invisible existence. Everything in her life was practically boring and uneventful until the day she passed away in a car accident, after some heartfelt goodbyes with her family, she was soon sent to the fictional world of Reborn! (2004) in order to pass her judgement and move on to heaven, so she could meet with her family once again. Her one priority is to not get attached to anyone, for it will make it hard for her to pass her judgement and pass on to heaven. The story is somewhat AU and is extremely OC-centric but is very well-written and delves in deeper to the other characters' pasts and thoughts.

Author's Summary: Alice was normal. Unremarkable, smart-ish and... normal. So when she died, she was shocked. But it was even MORE shocking when part of her Judgment for her to go to Heaven consisted of... protecting Tsuna?