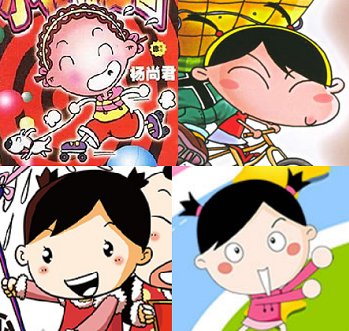 An Art Evolution of the titular character. note Upper-left is dated very early Turn of the Millennium. Upper-right was primarily used in the early-mid 2000's. Bottom-right is the TV show design initially used in 2008. Bottom-left design used in the (sole) magazine during the mid-late 2010's. There are more designs of the character besides these.

Little Cherry is a Chinese franchise of comics and animated adaptations. Active since the late 1990's, it centers on a young girl called Little Cherry (小樱桃, Xiao Ying Tao) and her family and friends.

Little Cherry is the chief intellectual property of the Zhengzhou Xoyto Comics Company from the Henan province. (Xoyto is also an abbreviation of the character's name). The cartoonist Yangshang Jun is the creator of the IP and co-founder of the company. (A Chinese article about her involvement with Little Cherry as of 2007

) According to an old summary, the company claimed to be the first private cartoon company in China, and another one (in English)

claimed the Little Cherry comic books became the most popular in the nation and had praise from government leaders. As typical with other comics from China, Little Cherry is obscure in the English-speaking world.

Little Cherry comics were published in newspapers, magazines, and books. By some point in the 2010's, they're probably down to a magazine for girls. Speaking of animation, the first cartoon series comprises Adobe Flash shorts and was released for web viewing in 2003. The majority or so can be viewed here

(some have English subtitles), and they're generally not family friendly. In 2008, a TV animated series made its debut on CCTV featuring a major retool of the cast. The subsequent comics have character designs similar to the show's. By the show's premiere, the franchise probably aimed solely to children. Episodes can be seen on Youku and other Chinese video sites.

Little Cherry, at least the 2008 animated version, has a negative reputation for allegedly plagiarizing Chibi Maruko-chan for such reasons as similar titles, characters and premises. There are articles in Chinese media that compare the two as an example of Chinese animation plagiarism. It's easy to come across web results of Chibi Maruko-chan from searching the name of Little Cherry in Chinese.

Needs Wiki Magic Love and help from someone with better knowledge in the Chinese Language and the comics and animated series.