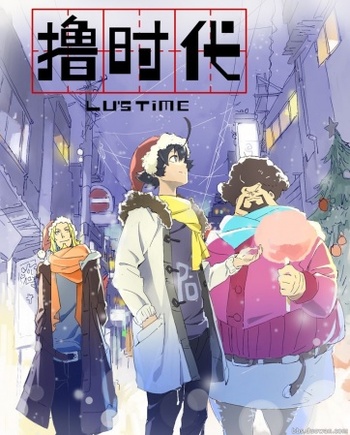 Lu's Time (Chinese: 撸时代, pinyin: lū shí dài; literally Era of fap/LoL, see below) is a 24-episode (mostly around 12 minutes per episode) sports anime produced by Penta Studios about a group of college students who want to become professional e-sports players on the League of Legends scene. The series has two seasons and episodes vary in length from 6 minutes to 10. It's been fansubbed into English on YouTube, but Chinese viewers will love all the pop culture references and memes that the English subs couldn't translate.

The titles of the show and the studio themselves are Chinese puns. Penta, while referencing pentakill, is also the Chinese pronunciation for "flaming at them" (喷他, pēn tā), and Lu (撸, lū) is a slang for A Date with Rosie Palms, but also means League of Legends since a Fan Nickname of League of Legends in China is "Lu A Lu" (撸啊撸, loosely "fap and fap"), corrupted from the game's initialism, "LoL".

League of Legends is played in 5-man teams, so naturally there's a Five-Man Band but there's also a Sixth Ranger, a Yaoi Fangirl, a Tsundere and an Alpha Bitch. The show is full of yaoi Ship Tease thanks to requests from fans but the main focus is always on the team's struggles to stay together, win championships and become better players. Frequently invokes both Rule of Funny but also Rule of Drama.