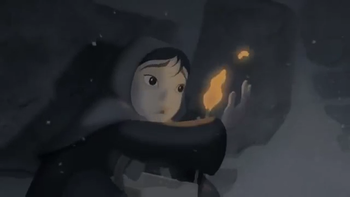 The Little Matchgirl is a 2006 animated short film from Disney, directed by Roger Allers.

It is, as one might guess, an adaptation of Hans Christian Andersen story "The Little Match Girl". A little girl in Tsarist Russia tries selling her matches on a cold winter day, but no one is buying. It turns out the girl is homeless. She goes back, defeated, to her "home" in a narrow alley. Sitting in the bitter cold and snow, she lights her matches for warmth. As the matches temporarily give her warmth, the little girl dreams of a warm hearth, and a lavish dinner, and finally of a carriage that takes her to a dacha in the country where she imagines visiting her grandmother.

This short was originally made for a proposed Fantasia 2006 feature film, but when that project was cancelled, The Little Matchgirl was released as a stand-alone short. Compare The Little Match Girl, a 1937 animated short adaptation from Columbia Cartoons that is quite similar.