This is the character sheet for the main supporting characters of Disney's Lilo & Stitch franchise. 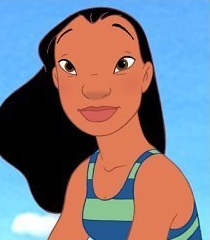 After she and her younger sister lost their parents, she struggled with trying to keep her sister under control and still living with her. It got to the point where she would lose her job. She brought Lilo to the animal shelter where they adopted Stitch. She was close to losing her sister for good, but when Lilo gets abducted by Gantu, and Nani realizes the existence of extraterrestrials, she goes with Jumba, Pleakley and Stitch to rescue her sister. After doing so, she is allowed to stay with Lilo on the account that they now have to look over Stitch, and she would also let the exiled Jumba and Pleakley live with them.

Her role was reduced in The Series, but she still appears frequently as the main caretaker of the ʻohana. She is constantly stressed by her new job as well as the antics of Lilo and their alien housemates, but still means well. She has a brief, unvoiced appearance in the Stitch! anime where she is shown in a flashback scene as an older woman. 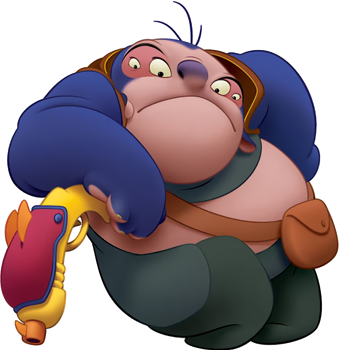 A four-eyed Kweltikwan scientist and the creator of Stitch and over six hundred other genetic experiments.

Jumba and 626 were arrested by the United Galactic Federation almost immediately after the latter's creation, and the former was sentenced to prison for illegal genetic experimentation. However, when 626 escapes to Earth, the Federation offers the "evil genius" his freedom for his creation's capture. Jumba is sent to the planet with supposed Earth expert Agent Pleakley to hunt down 626, but they find that the creature was adopted by a little Earth girl as "Stitch" for protection, preventing a direct approach. He and Pleakley try and fail to get Stitch indirectly, ending up getting fired and exiled to the planet they're on after failing their mission. However, the firing actually allows Jumba to try to capture Stitch directly, Federation protocol be damned. He chases down and fights Stitch in Lilo's house, destroying it in the process. Jumba eventually grabs and cuffs Stitch some moments afterwards when the experiment escapes from Captain Gantu without Lilo, but Lilo's older sister Nani confronts and demands Jumba to bring Lilo back. After being convinced by Stitch, Jumba flies Stitch, Pleakley and Nani in his spaceship to help rescue Lilo. He and Pleakley would end up helping to rebuild the Pelekai sisters' house and live with them and Stitch afterwards, with Jumba becoming the sisters' "uncle".

Throughout The Series, Jumba assists Lilo and Stitch in hunting down the other experiments, usually providing the duo with various tools he creates. After they complete their mission, Jumba was given the keys back to his old lab on the planet Turo, but later he decides to give up his lab to stay on Earth with Lilo.

In the Stitch! anime, he leaves Earth at an unknown point of time after Stitch left the planet in order to get his experiment back. He ends up on the Okinawa Prefecture along with his experiment, reunites with Pleakley, and the three aliens end up living in Japan with Stitch's new human friend, Yuna. In Stitch & Ai, he and Pleakley are ordered by the Grand Councilwoman to take Stitch into protective custody after the experiment was kidnapped by an alien gang, but upon finding Stitch living with a new human friend in China, Ai, Jumba decides to stay with Stitch to help combat the alien criminals.

A one-eyed, two-tongued, three-legged Plorgonarian who formerly worked for the United Galactic Federation as an Earth expert—even though he does not truly know that much about our planet.

After convincing the Grand Councilwoman not to gas Earth in order to stop Experiment 626 (since the planet is home to an endangered species—the mosquito), Pleakley is forced to work with the experiment's creator Jumba in hunting 626 down on the planet, keeping an eye over the mad scientist. He tries and fails to keep Jumba under control, and they both fail their mission to capture Stitch, getting exiled on Earth. However, Pleakley and Jumba would end up living with Lilo, Stitch and Nani, helping to rebuild Lilo and Nani's house (which Jumba and Stitch destroyed in their fight), with Pleakley becoming the Pelekai sisters' "aunt".

In The Series, he helps Lilo and Stitch capture experiments, albeit to a lesser extent than Jumba. Frequently cross-dressing in his role as the "aunt", Pleakley also assists Nani in maintaining the household. In Leroy & Stitch, he was made the head of Earth studies at Galactic Alliance Community College, but gives up the role to stay on Earth with Lilo.

In the Stitch! anime, he ends up living in Japan along with Jumba, Stitch, and Stitch's new human friend Yuna. In Stitch & Ai, he and Jumba are ordered by the Grand Councilwoman to retrieve Stitch, but they end up staying with Stitch in China with the experiment's human friend Ai. 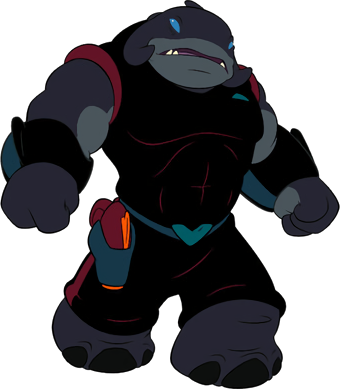 A large whale-like alien from the eighth planet in the Kreplok star systemnote His species is described as "Shaelik" on The Other Wiki, but there's no official evidence proving that to be the canonical name of his species. who was the Captain of the Galactic Armada until he was forcibly retired for failing his mission to capture Stitch and also for kidnapping Lilo.

He was later hired as Hämsterviel's henchman, who orders the ex-captain to retrieve the other genetic experiments Jumba made. He reluctantly gained a partner early on in the lazy, cowardly, sarcastic Experiment 625, developing a friendship with the sandwich-loving artificial alien over time. After failing to hold on to any experiment besides 625 thanks to Lilo and Stitch, he breaks Hämsterviel out of prison and helps him force Jumba to make an experiment specifically for Hämsterviel. However, Hämsterviel fires Gantu after finding said new experiment Leroy to be a more reliable lackey. In turn, Gantu assists Lilo, Stitch, and 625—now renamed Reuben—in stopping Hämsterviel, gaining his old job back in the process, this time with Reuben as his galley officer.

In the Stitch! anime, he has lost his job again (supposedly due to his terrible singing according to the English dub), and he and Reuben were rehired by Hämsterviel as his henchmen again. In Stitch & Ai, however, he is still at his post as Captain of the Galactic Armada.

Introduced in the sequel material 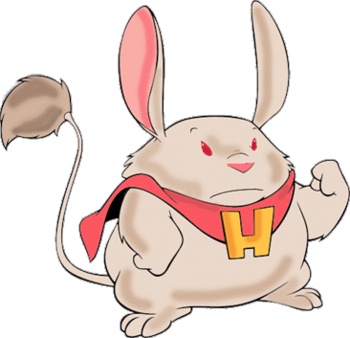 Hamster-Wheel... er... Hämsterviel is a gerbil-like... we mean um... hamster-like alien with rabbit-like ears, and Jumba's former partner. Hired Gantu to track down and capture all the other experiments. He's the main antagonist of the franchise.

A chubby, golden-yellow marmot/koala-like experiment who is Jumba's last experiment before Stitch and Gantu's sidekick.