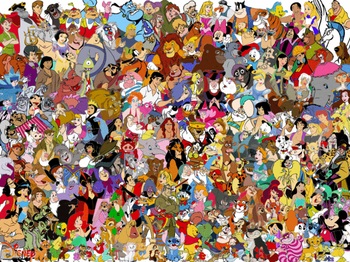 And this is before the Revival Era...
Several groups of Disney characters have their own sheets on this wiki.
Advertisement:

This page is only focused on films in the Disney Animated Canon, their franchises' animated spin-off and sequel material (provided that they're in continuity to the original animated films in some form; pages for material that are in their own completely Alternate Universe such as the Disney Live-Action Remakes don't count), or franchises associated with characters from the DAC. Note that some of these pages may be shared with their spin-offs or even non-Disney material (which are noted below).