Featured in 1985's The Black Cauldron 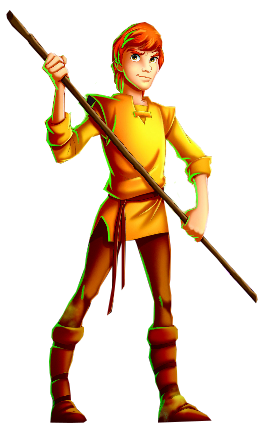 "Look at me, Hen! I can do it!"
Voiced by: Grant Bardsley; Christophe Lemoine (European French dub) 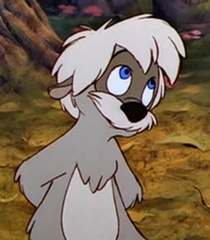 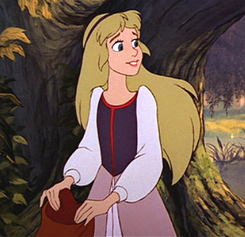 "Girl? GIRL?! If it weren't for this girl, you would still be in the Horned King's dungeon!"
Voiced by: Susan Sheridan; Chantal Macé (European French dub)

A princess who was kidnapped by the Horned King; she's the deuteragonist of the movie.

A self-styled bard and the tritagonist. 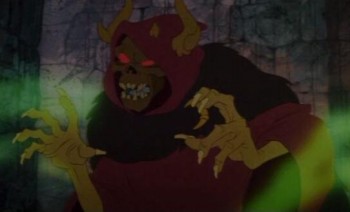 The main antagonist, the skull-faced Horned King is a centuries-old Sorcerous Overlord with A God Am I delusions, who seeks out the titular Black Cauldron, which he plans to use to turn all life into undead minions, so he can rule over them as a Physical God.

Creeper is the Horned King's sidekick and the secondary antagonist.

The Witches of Morva

Three neutral witches that are infamous for making bargains, they sold the Black Cauldron for Taran's Magic Sword.

An army of barbaric soldiers who serve the Horned King. They act as minor antagonists during the film. 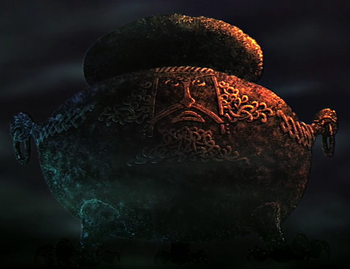 "There, his demonic spirit was captured in the form of a great Black Cauldron."
Voiced by: Corey Burton (Once Upon a Halloween)

The evil king who was thrown alive into molten iron that was used to forge the Black Cauldron. His spirit remained trapped inside it, and his face was engraved upon it. He's implied to be the movie's equivalent of Arawn, the main antagonist of the original The Chronicles of Prydain series. 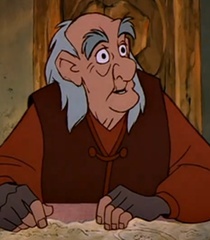 "Hen Wen, from you, I do beseech...."
Voiced by: Freddie Jones; Philippe Dumat (European French dub)

Dallben is the greatest wizard in Prydain, the keeper of the oracular pig Hen Wen, Taran's adoptive father, and one of the main protagonists.

Hen Wen is the magical pet pig of Taran and Dallben.

Eidelleg and the Fair Folk

A group of kindly fairy-like creatures led by King Eidilleg.