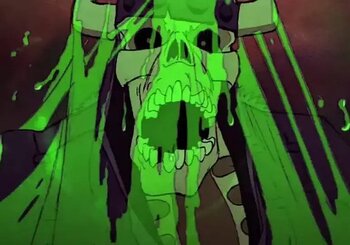 "Arise, my messengers of death! Our time has arrived!"
While The Black Cauldron may be related to its innocuous, light-hearted Disney cousins, it subverts them by being full of Nightmare Fuel beyond most children's comprehension. In fact, it was Executive Meddling that saved it from being too scary!