This page covers the four main characters of Wreck-It Ralph. 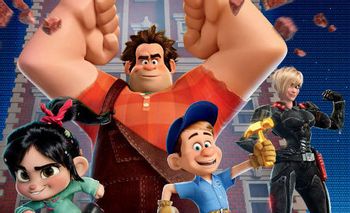 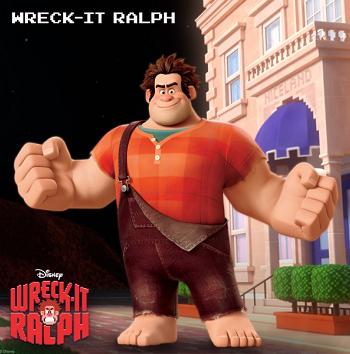 "Sure must be nice, being the good guy."

Ralph is the Punch-Clock Villain of the popular arcade game Fix-It Felix Jr. In it, his job is to destroy an apartment building that the hero, Felix, must fix. After 30 years of doing the same job, Ralph decides he doesn't want to be a bad guy anymore, and sets out on a game-jumping quest to become a hero. 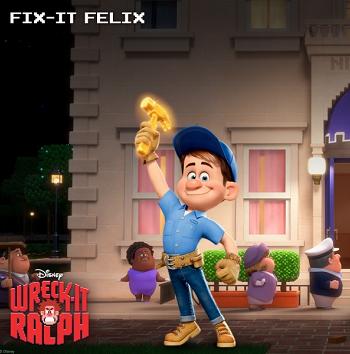 "Why do I fix everything I touch?!"

Felix is the eponymous hero of the game Fix-It Felix Jr., where it's his job to fix the building Ralph tries to destroy. Despite their roles in the game, he seems friendly toward Ralph after hours, and is beloved by the game's characters. When Ralph abandons the game, Felix sets out to find him and bring him back. 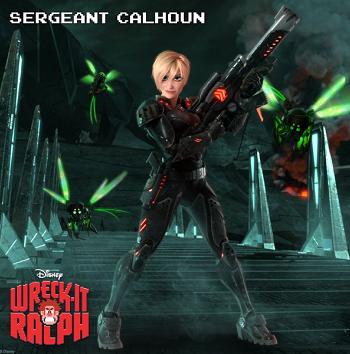 Sergeant Calhoun is an important NPC of the First-Person Shooter Hero's Duty, the first game Ralph visits on his quest to become a hero. In the game, she, along with the player, battles "Cy-Bugs", the dangerous insectoid products of a failed experiment. She later teams up with Felix to get Ralph back in his own game, and stop the Cy-Bug Ralph accidentally released. 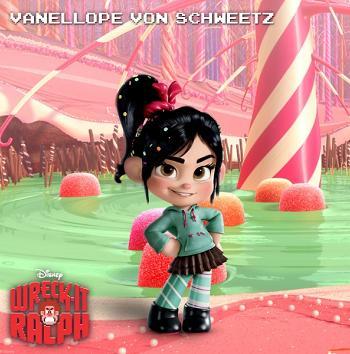 Vanellope is a character from the Racing Game Sugar Rush, the second game Ralph goes to on his quest to become a hero. She is a glitch and is rejected by the other characters in her game for it, but she still aspires to be a racer like them. Although she annoys Ralph at first, they form a sibling-like friendship.