The Family in General 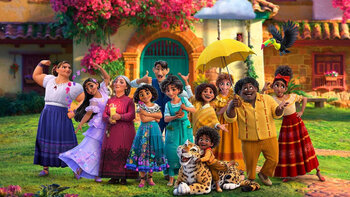 Click here to see the family in the end. 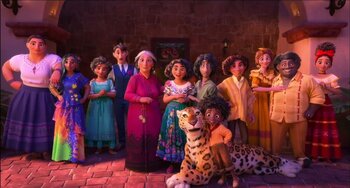 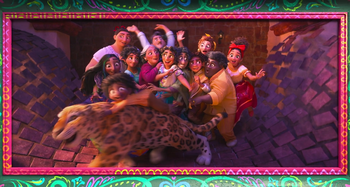 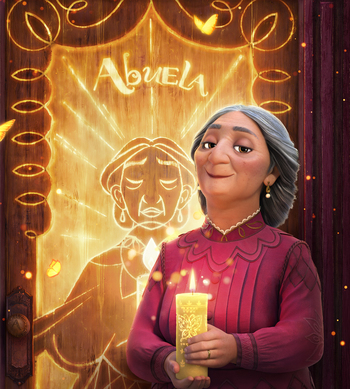 The matriarch of the Madrigals and Mirabel's grandmother. 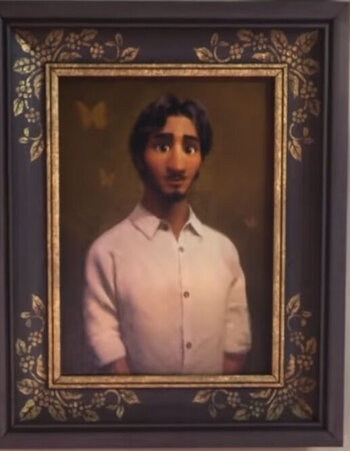 The deceased patriarch of the Madrigal family and Mirabel's grandfather. 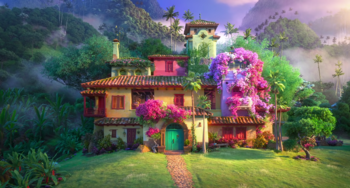 The Madrigals' family home, which is alive thanks to the same miracle that grants their gifts. 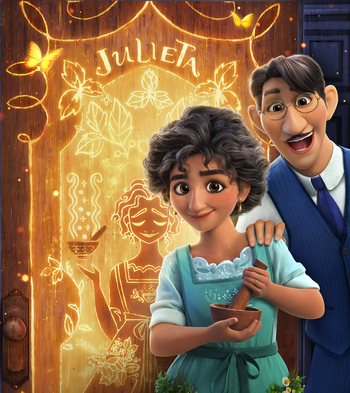 Mirabel's parents. Julieta's gift lets her heal others with the food she cooks.

Tropes that apply to Julieta

"I healed your hand... with my love for my daughter."

Tropes that apply to Agustín

"Surrounded by the exceptional, it was easy to feel... "un-ceptional"."
Advertisement:
Isabela 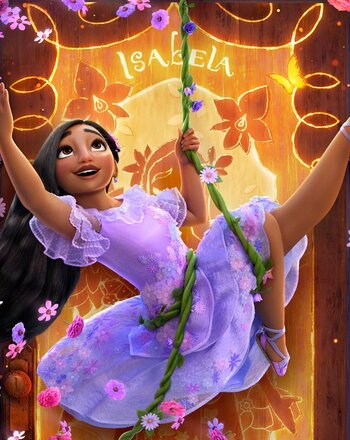 The oldest daughter of Julieta and Agustin. Her gift lets her psychically grow a wide variety of plants, mostly flowers. 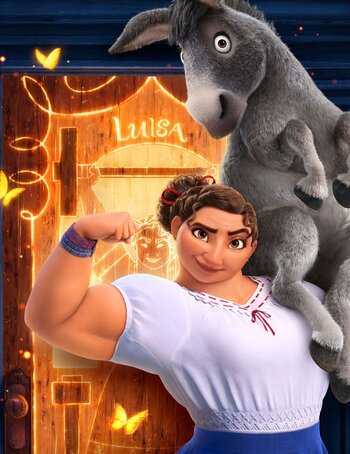 The middle daughter of Julieta and Agustin. Her gift gives her Super Strength.

The youngest daughter of Julieta and Agustin and the main heroine. For some unknown reason, she's the only Madrigal child who didn't get a gift. Despite her insecurities about her lack of magic, she still tries to contribute to her beloved family in any way she can. 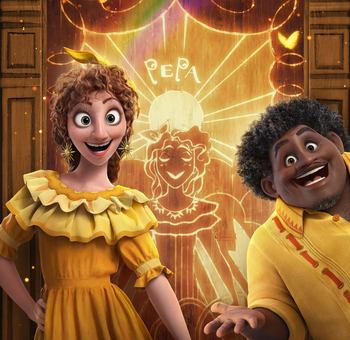 Pepa: Are you telling the story, or am I?
Félix: I'm sorry mi vida, go on.

Mirabel's respective maternal aunt and uncle by marriage. Pepa's gift lets her control the weather depending on her mood.

Tropes that apply to Pepa

"We don't talk about Bruno."

Tropes that apply to Félix 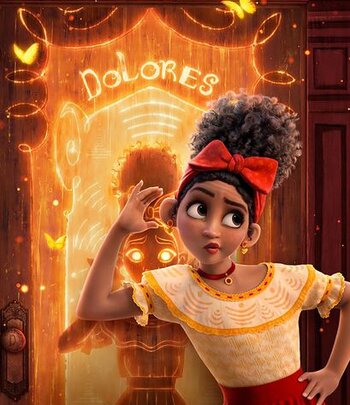 Pepa and Félix's eldest child and only daughter. Dolores's gift gives her an enhanced sense of hearing. 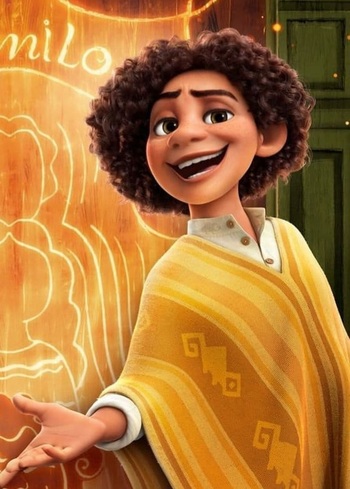 Pepa's and Félix's middle child and older son (who is presumably older than Mirabel). His gift lets him shapeshift into whatever he wants. 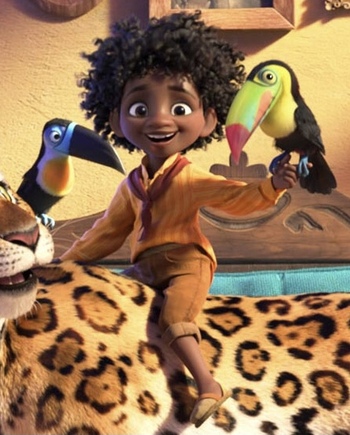 Pepa and Félix's youngest son, who is given the gift of speaking to and understanding animals. 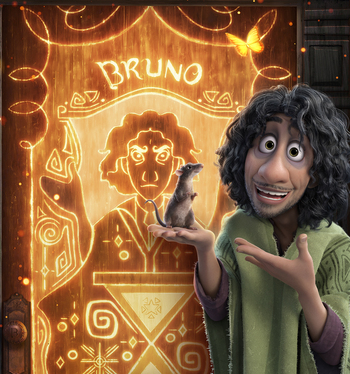 Alma's only son, and Julieta and Pepa's brother. He mysteriously disappeared one day years ago, and the family never talks about him. Bruno's gift lets him see the future, which mostly appears on slabs of emerald glass. 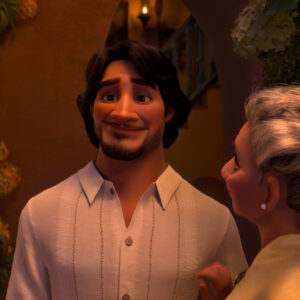 "I just have so much love inside."
Voiced by: Maluma (English & Spanish), Gianfranco Miranda (Italian), Shunsuke Takeuchi (Japanese)

The hottest young man in town, and Isabela's prospective husband. 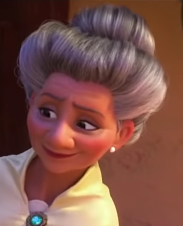 "Well, then, let’s hope tonight is not a horrible disaster."
Voiced by: Rose Portillo (English) 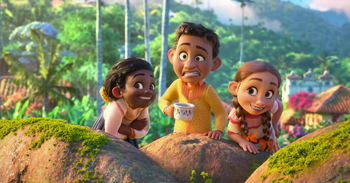 "It is physically impossible to relax!"
"Tell us everything! What are your powers?"
"JUST TELL US WHAT EVERYONE CAN DO!"
Voiced by: Alyssa Bella Candiani (English), Noemi Josefina Flores (English), Paisley Day Herrera (English), Brooklyn Skylar Rodriguez (English) and Ezra Rudolph (English)

A group of children from town who admire the Madrigal family. The three most prominent are Cecilia (blonde pigtails), Alejandra (dark hair in a ponytail), and "Pumped" Juancho who loves coffee. 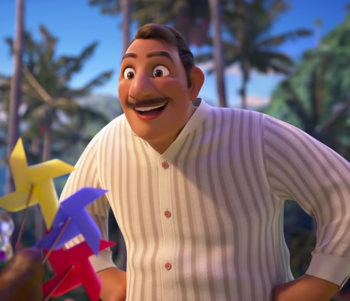 "Mirabel! Delivery! I gave you the special since you're the only Madrigal kid with no gift."
Voiced by: Juan Castano (English)

A local member of the town. 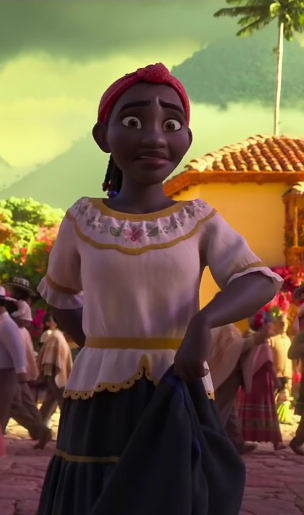 "He told me my fish would die. The next day? DEAD!"

A local member of the town. 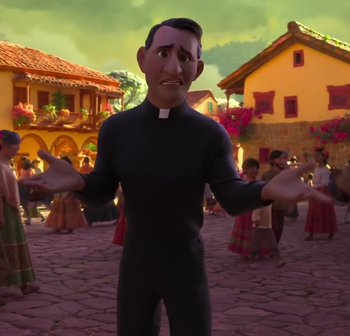 "He said that all my hair would disappear now look at my head!"

The priest of Encanto. 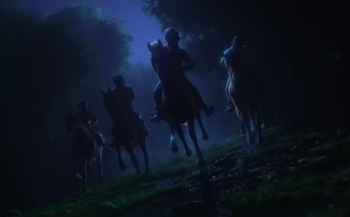 The mysterious armed men who sacked Pedro’s and Alma’s hometown and drove them into exile. Their murder of Pedro set the plot of Encanto in motion.