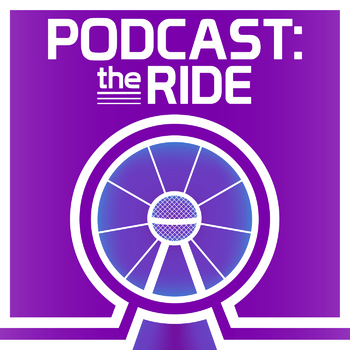 Warning! The following podcast may include...

Podcast: The Ride is a podcast about Theme Parks (and sometimes Amusement Parks) from the Forever Dog Network hosted by Mike Carlson, Jason Sheridan, and Scott Gairdner, three self-professed "childless men in their thirties" who unapologetically adore not only major parks like Disney or Universal but also any themed experience from resorts and malls to restaurants and electronics stores. Each episode features the three comedians, often joined by a guest, diving deep into discussion of a park, ride, or themed experience, usually tying it in with personal stories and abundant tangents.

The show has notably deviated from the standard podcast format a few times in order to experiment with loose, highly improvised Story Arcs, most notably in the marathon 19-part "City Walk Saga" in which the hosts explored every store in Universal Studios Hollywood's external "City Walk" shopping complex in order to free the spirit of the mysterious Sector Keeper.

Podcast: The Ride provides examples of: