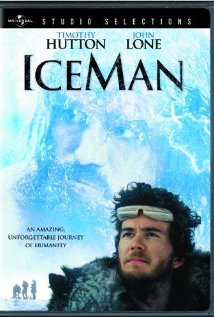 I, who was born to die, shall live. That the world of animals, and the world of men, may come together, I shall live.
— Inuit Legend (from the Title Card)
Advertisement:

Iceman is a 1984 Science Fiction film directed by Fred Schepisi about the discovery by a mining corporation of a 40,000 year-old frozen man who, when thawed for research, comes to life. The film follows the philosophical questions raised, and the attempts to communicate with him.

This film came out amidst a run of various caveman-themed movies (Such as Quest for Fire, 1981; Caveman, 1981; Clan of the Cave Bear, 1986), but this one carefully examines the issues involved with resuscitating a paleolithic man in the late 20th century.

Not to be confused with Iceman (2017), a German drama imagining the last days of the Alpine Bronze Age mummy known as Ötzi the Iceman; The Iceman (2012), a biopic about alleged Professional Killer Richard Kuklinski; or founding X-Men member, Robert Drake aka Iceman.