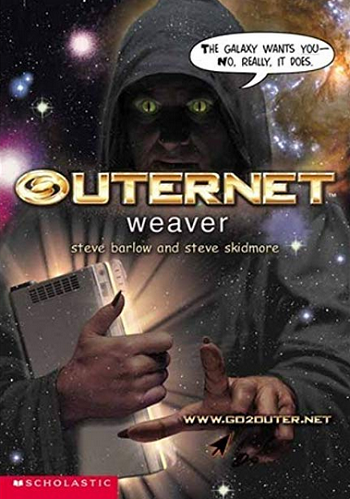 We are not alone. We might wish that we were... But we're definitely not.
Advertisement:

There are some things that exist solely to lampshade, subvert, invert, and generally deconstruct any tropes they come across. This series does that for Space and Science Fiction Tropes.

The series follows fourteen year-old Jack Armstrong, his friends Merle and Lothar (Loaf) and two Shapeshifting aliens trapped in the form of a dog and cat. After Jack receives The Server, an alien teleportation/database system, the three humans are recruited to prevent The Tyrant's evil plan to steal The Server and thus control the Outernet. (Which is just the outer-space version of the internet). It has some surprising plot twists towards the end. There are six books in the series.