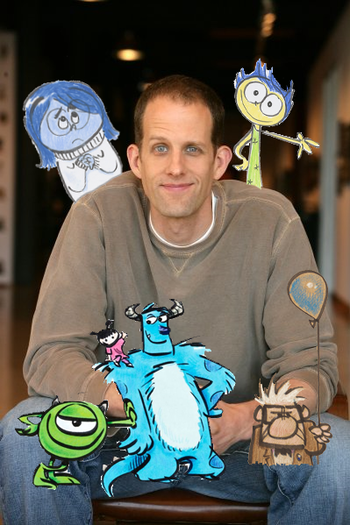 I don't think people in any way, shape, or form like to be lectured to. When people go to a movie, they want to see some sort of experience of themselves on the screen. They don't come to be taught. So in that sense, and in terms of any sort of beliefs, I don't want to feel as though I'm ever lecturing or putting an agenda forth.
Advertisement:

Peter Hans Docter (born October 9, 1968 in Bloomington, Minnesota) is an American animator, film director, screenwriter, producer, voice actor and chief creative officer of Pixar. He is best known for directing the animated feature films Monsters, Inc., Up, Inside Out and Soul.

Growing up, he was introverted and socially isolated, preferring to work alone and having to remind himself to connect with others. Docter taught himself cartooning, making flipbooks and homemade animated shorts with a family movie camera, because he found it as a way to "play God" by making up nearly living characters. Despite both of his parents teaching music and his two sisters being professional musicians, Docter was not particularly interested in music, although he did learn to play the double bass and performed alongside the orchestras for the soundtracks of Monsters, Inc, Up, and Inside Out, as well as conducted the orchestra for one of his student films.

His biggest inspirations were Chuck Jones, Walt Disney, and cartoonist Jack Davis. Although Docter had planned to work for Disney, his best offers were from Pixar and the producers of The Simpsons. He did not think much of Pixar at the time and later considered his choice to work there a strange and unusual one, though it worked out in the end. Docter is a fan of anime, particularly the work of Hayao Miyazaki. He is also a fan of the work done by his competitors at Dreamworks, since he believes that "it's a much healthier environment when there is more diversity".