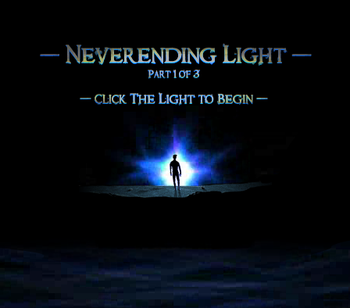 Neverending Light is a top-down Survival Horror game, developed by Jiggmin in Adobe Flash and published

on Kongregate on February 10th, 2009. It is notable for possessing higher production values then most Flash games, such as possessing fully-voiced dialogue with multiple actors. It was intended to consist of three episodes, but unfortunately, things never moved beyond the first.

The story begins on the protagonist's birthday, when his girlfriend, Anabel, gifts him a tour within Cablad Caves, an ancient underground system known for being incredibly dark. Things go wrong when the lights are turned off, as scheduled...but then they do not go back on, and the tour guide gets killed by a strange creature. By the time the protagonist picks up the flashlight tour guide dropped, Anabel is missing, and there's no-one else left. The only thing left to do is escape, with or without her.