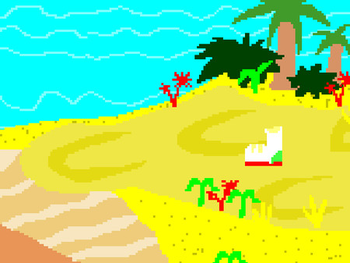 The newest, most spectacular innovation in audio-visual enchantment.
"Time is running out where angels are now demons and vice versa, and human emotion is no longer a valid format, there is one entity ready to put his foot down and say "NO!" Play as a timid left foot determined to make a mark on the work that's ever so crumbling around him. Make your way through exhilarating, and enchanting landscapes. Move with Shoe. Live with Shoe. Breath with Shoe. Be. Shoe.
Advertisement:
-an excerpt from one of the game's trailers

Ticket is an odd 2D platformer developed by Magicdweedoo birthed into the world on 16th August, 2016 on both Steam

There, you play as Shoe, a timid left foot ready to make his mark on the world ever so crumbling around him. In this game, Shoe goes on a grand 12 level journey where we see him befriend a man of smoke, go within an old man's crumbling brain just to find his way out, go grocery shopping, and much more. Shoe's quest is a tale of happiness, sorrow, despair, and love. Will you help Shoe save the world?

This grand adventure holds a few examples of: