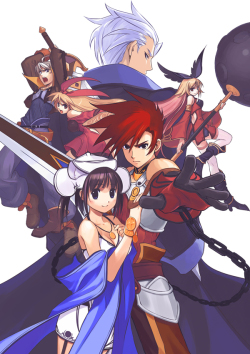 Atelier Iris 3: Grand Phantasm is the third in the series of the "Iris" video role playing games, itself a subseries of the Atelier series, produced by the GUST company in 2006. The game may or may not be a direct sequel to the previous games, all of whom feature a female alchemist named Iris in an important role. However, Grand Phantasm is the first that actually has Iris as a playable character.

The story takes place around a city called Zey Meruze, that resembles Venice in that it is crisscrossed by water channels (with Fairies offering a gondolier service.) However, Meruze also has portals to other dimensions, called "Alterworlds" where, for some reason, humans can't stay for more than a short time (they eventually are magically transported out.) Iris (who in this game is still an amateur alchemist) and her friends Edge and Nell work as "raiders" for the Raiders Guild, an organization that performs tasks for people for a price. Usually these involve missions into the Alterworlds, but can also be as mundane as finding missing pets.

The game basically follows Iris's team as they rise through the Guild's ranks. The real story however, involves a sealed book that Iris owns: and which contains an enormous power that can only be released by finding eight "gem-like fragments", so she looks for them. And you can probably guess that it isn't going to be quite that simple...