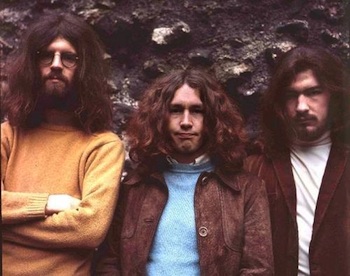 Egg was an obscure Progressive Rock / Psychedelic Rock trio (Not to be confused with The Egg or Eggs) active in 1969-1972 - and briefly again in 1974 for a farewell album - consisting of Mont Campbell on bass and vocals, Dave Stewart (not of Eurythmics) on keyboards and Clive Brooks on drums. They can be considered to be a part of the Canterbury Scene, which consisted of progressive rock and jazz musicians centered around Canterbury in the late 60s and early 70s. They grew out of a band called Uriel (also known as Arzachel), but the name was changed because it sounded too much like "urinal".

Some consider the band to be the poor man's version of Emerson, Lake & Palmer and indeed Mont Campbell himself has cited them as a main influence, but working in roughly the same genre and having the same lineup of instruments is about as much similarities as these bands have sound wise. Campbell has also stated that he considered the later career of ELP to be a Sell-Out.

The bands sound is dominated by the hammond organ, quotations from classical music (Though Egg was more influenced by more modern classical music, especially Igor Stravinsky) mixed in with jazzy improvisation, quirky humorous lyrics (With a hefty dose of humor in the music as well) and constantly changing time signatures.

The band released two albums during their 'official' active years: Egg (1970) and Polite Force (1971). Having barely enough gigs to stay alive and unable to secure a contract for a third record they disbanded. In 1974 they reunited briefly to record unreleased material that resulted in The Civil Surface.

Their music can be found on Youtube and: http://www.egg-archive.com/

This band has the following tropes: