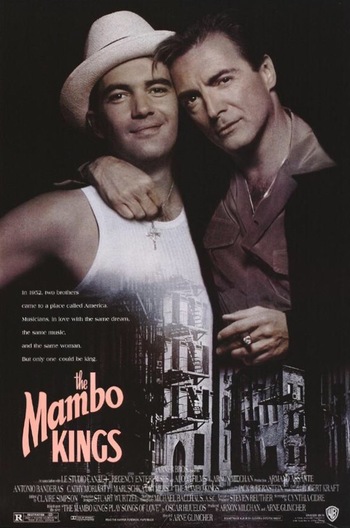 "In the name of the Mambo, the Rumba, and the Cha-Cha-Cha."
Advertisement:

The Mambo Kings is a 1992 musical drama directed by Arne Glimcher and based on the award-winning novel The Mambo Kings Play Songs of Love by Oscar Hijuelos.

Cesar (Armand Assante) and Nestor Castillo (Antonio Banderas) are two Cuban musicians (Cesar's a singer and the manager, while Nestor plays trumpet and is the songwriter) who are forced to flee Cuba in the 1950's to escape the wrath of a gangster. They go to New York City to live with relatives, and try to break into the music business. Except the clubs are controlled by Fernando Perez (Roscoe Lee Browne), and since Cesar refuses to be under the thumb of a gangster again, the brothers and their band have to struggle. Meanwhile, though Nestor falls in love with Delores Fuentes (Maruschka Detmers), a student, he misses his old girlfriend Maria (Talisa Soto) from Cuba.

Best known for its Oscar-nominated song "Beautiful Maria of My Soul".