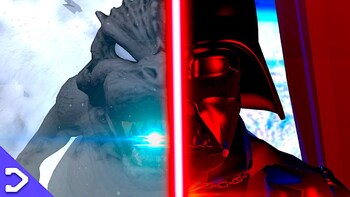 The King of the Monsters is now at the Galaxy, Far Far Away
Advertisement:

A long time ago, in a galaxy far far away, a squad of Rebels became locked in an all out war with a platoon of Imperial soldiers, that was until they were disturbed by something much bigger than anything they had seen before. Witness the battle between Godzilla and the Imperial army!

" is an animated Crossover short pitting two of the famous franchises in media, Godzilla and Star Wars in an epic showdown.

This short contains the following tropes: