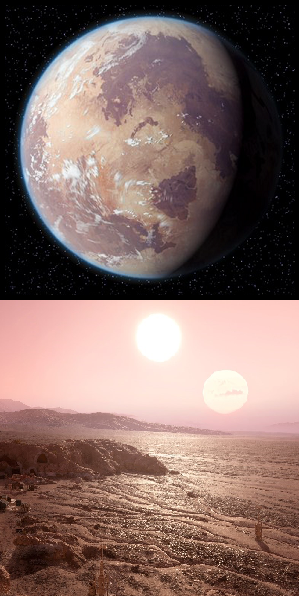 A desert planet located in a binary star system, Tatooine was a lawless world controlled by the Hutts, specifically Jabba the Hutt, whose palace was located on the world. As such, Tatooine was a popular destination for criminals and bounty hunters to ply their trade or hide. Lacking any significant sources of water, many residents made their living by drawing water from the atmosphere on moisture farms. The planet was orbited by three moons, Ghomrassen, Guermessa, and Chenini. 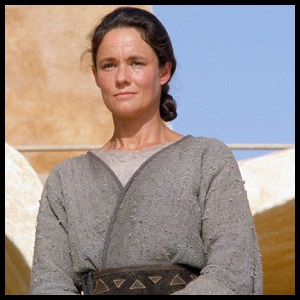 Anakin Skywalker's mother — and paternal grandmother to Luke Skywalker and Leia Organa, and great-grandmother to Ben Solo/Kylo Ren — who was a brave and resilient woman who survived life as a slave to become a moisture farmer. She surrendered her son to the Jedi Order, putting him on a path to become a Jedi. Her death at the hands of Tusken Raiders becomes a critical step on Anakin's journey to The Dark Side of the Force. 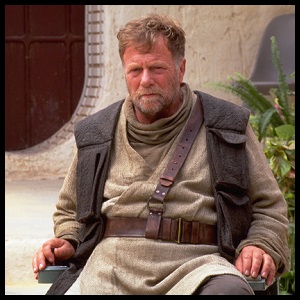 Portrayed by: Jack Thompson
Appearances: Attack of the Clones
"Shmi is my wife. Come inside, we've got a lot to talk about."

A humble and hardworking moisture farmer from Tatooine and the father of Owen Lars. He freed and married Shmi Skywalker after buying her from Watto, becoming Anakin's stepfather. 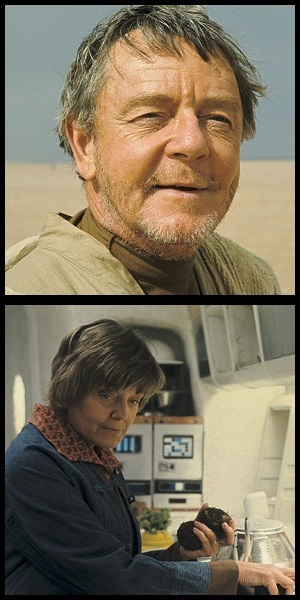 Click here to see them in their younger years 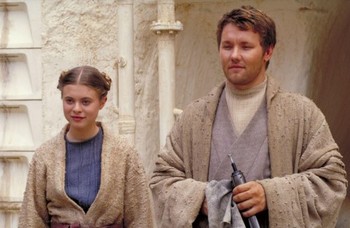 Owen was the son of Cliegg Lars from his previous relationship and the stepbrother of Anakin Skywalker. At the behest of Obi-Wan Kenobi, he and his wife Beru adopted their nephew and Anakin's son, Luke.

Tropes that apply to Owen

Tropes that apply to Beru

Appearances: Attack of the Clones note  grave only

The younger brother of Cliegg Lars and uncle to Owen Lars.

Appearances: All There in the Manual

The first wife of Cliegg Lars and mother to Owen Lars, who died years before they met the Skywalkers. 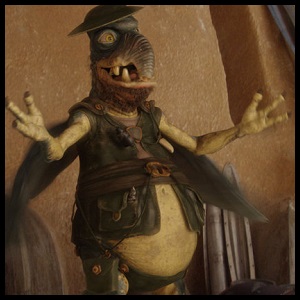 Voiced by: Andrew Secombe
Appearances: The Phantom Menace | Attack of the Clones
"No money, no parts, no deal!"

A junk dealer who did business in Mos Espa. He owned the slaves Shmi Skywalker and her son Anakin, whom he put to work in his shop. 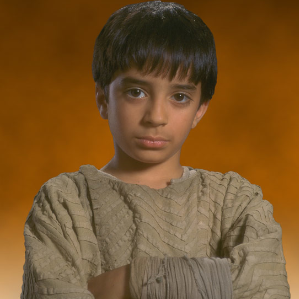 Portrayed by: Dhruv Chanchani
Appearances: The Phantom Menace
"This is so wizard, Ani!"

A slave child on Tatooine who was close friends with Anakin. 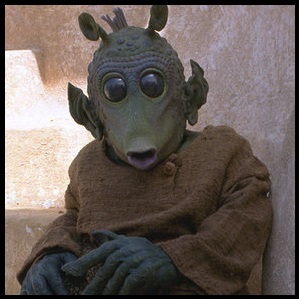 A six-year old Rodian slave child from Tatooine and one of Anakin's playmates. 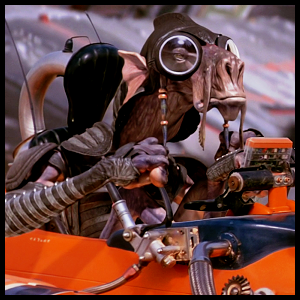 A vicious podracer and reigning champion of the Boonta Eve Classic. He was not above cheating to win a race, often using various illegal weapons hidden in his heavily modified podracer against his opponents. 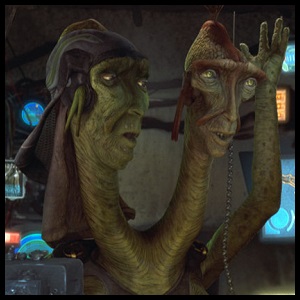 Portrayed by: Greg Proops (Fode), Scott Capurro (Beed)
Appearances: The Phantom Menace
"I don't care what universe you're from, that's got to hurt."

The announcers of the Boonta Eve Podrace, Fode and Beed were a two-headed Troig who shared a single body. The red-skinned Fode provided commentary in an easy Basic drawl, while the green-skinned Beed provided counterpoint in Huttese. 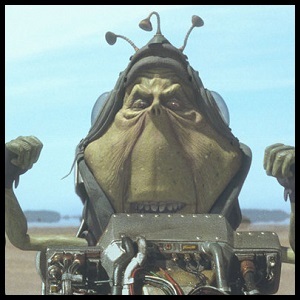 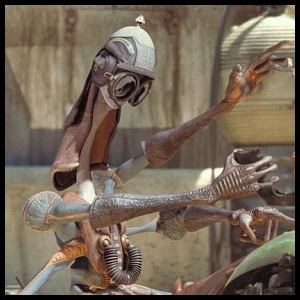 The Boonta Eve was considered to be the most dangerous of all podracing courses. 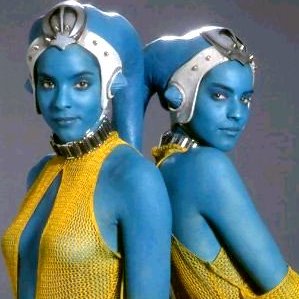 Ann on the left, Tann on the right. 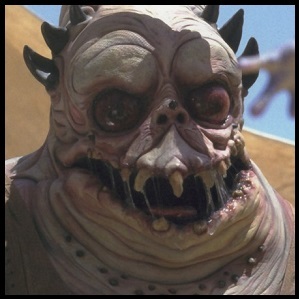 A Swokes Swokes gorgmonger who chastised Jar Jar Binks when she saw him attempting to snatch away of of her gorgs without paying. 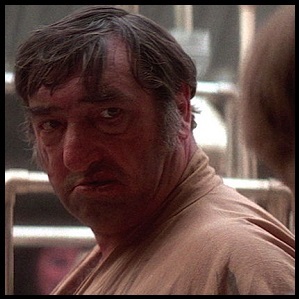 The bartender of Chalmun's Cantina in Mos Eisley. 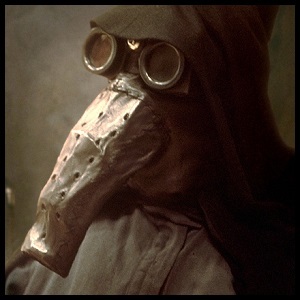 Portrayed by: Saddie Edonn
Voiced by: John Wayne note based on archive audio
Appearances: A New Hope | From a Certain Point of View

He serves as an informant to those who hire his services in Mos Eisley. Garindan was hired by the Empire to assist them in their search for two Rebel droids attempting to get offworld. 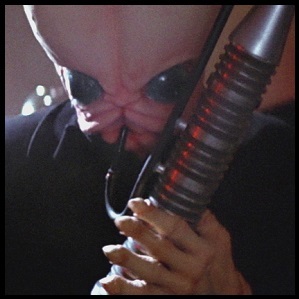 Portrayed by: Rick Baker
Appearances: The Phantom Menacenote deleted scene | A New Hope | From a Certain Point of View

A musician and leader of the Modal Nodes, who perform in Chalmun's Cantina. 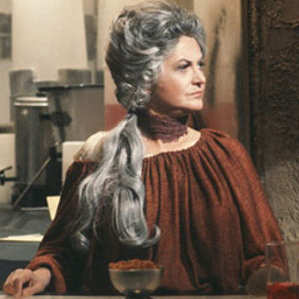 Portrayed by: Bea Arthur
Appearances: From a Certain Point of View

The night-time bartender at Chalmun's Cantina. 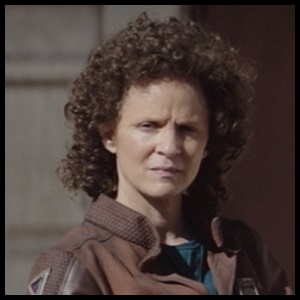 "If this thing either divides or buds, I will gladly pay for the offspring."

Portrayed by: Amy Sedaris
Appearances: The Mandalorian
"What can I say, I'm an excellent judge of character."

The overseer and repairer of Hangar 5-3. 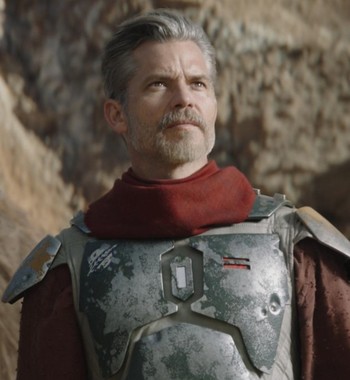 A lawman from Mos Pelgo, driven out of the town when the Mining Collective took it over and enslaved its inhabitants. After wandering the desert for days with nothing but a crate of crystals he stole from the Collective, he was rescued by a Jawa sandcrawler and traded the crystals for an acid-scarred set of Mandalorian armor — Boba Fett's. Clad in impenetrable beskar, he returned to Mos Pelgo and freed it from the Collective, restoring law and order to the town.

A woman who works with Cobb Vanth in "Freetown".

See his entry on the Hutt Clans page.
Borgo the Hutt

A young Hutt living in Freetown. Vanth enlists Malakili as his tutor. 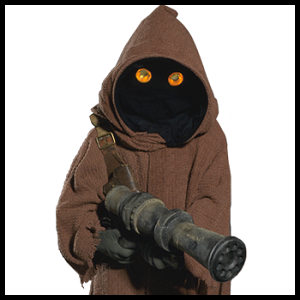 "Utinni!"
Portrayed by: Jack Purvis (Chief Jawa in A New Hope)
Appearances: The Phantom Menace | Attack of the Clones | The Clone Wars | From a Certain Point of View | A New Hope | Commander | Battlefront | Star Wars (Marvel 2015) | Return of the Jedi | Aftermath | The Mandalorian | The Rise of Skywalker
"I can't abide those Jawas! Disgusting creatures!"
— C-3PO

Short, rodent-like natives of Tatooine. They are passionate scavengers, seeking out or even stealing technology for trade in the deep deserts in their huge sandcrawler transports. Some can also be found on other worlds such as Arvala-7. 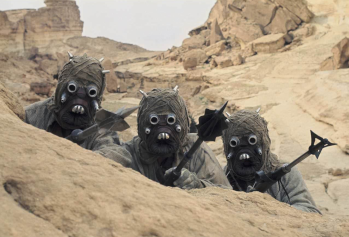 Appearances: The Phantom Menace | Attack of the Clones | Rebels | From a Certain Point of View | A New Hope | Commander | Battlefront | Darth Vader | Star Wars (Marvel 2015) | Empire's End | The Mandalorian
"The Sand People are easily startled but they'll soon be back, and in greater numbers."
— Obi-Wan Kenobi

Also known as "Tusken Raiders" and pejoratively referred to as "Sand People" by locals, these nomadic, primitive humanoids are native inhabitants of Tatooine's harsh deserts. They frequently raid settlements inhabited by off-world species, who they view as water-stealing invaders.

Appearances: From a Certain Point of View | A New Hope

The chief of a tribe of Tuskens whose territory borders that of Obi-Wan Kenobi's hut. 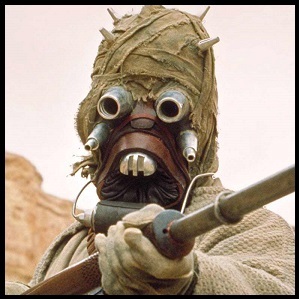 Portrayed by: Peter Diamond
Appearances: From a Certain Point of View | A New Hope

A young Tusken warrior who recently came of age and seeks to revitalize his tribe. 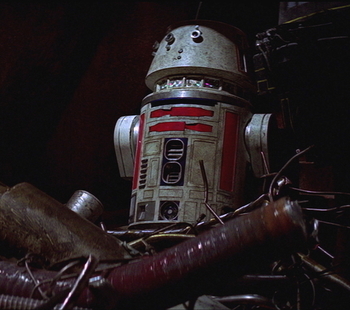 Appearances: A New Hope | From a Certain Point of View | Battlefront | The Mandalorian
"This R2 unit has a bad motivator. Look."
—Luke Skywalker

A faulty astromech droid who was captured by the same Jawas as R2-D2 and C-3PO. He malfunctioned just in time to allow Owen Lars to acquire R2-D2 in exchange, keeping him with C-3PO.

Tatooine characters on other pages