Literature / Book of the Stars 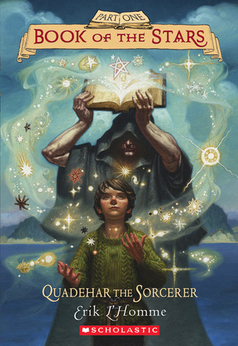 A series of three teenager's fantasy books by Eric Lhomme, written in 2001 and first published by Scholastic in 2003.

The Lost Island is a strange Magical Land: Not quite magic, because people go to the same kinds of schools as we do, wear the same clothes, have electricity and all that goes with it (televisions, computers, video games, cinema theaters), etc. And it's not quite a Land, because there is no guns, cars, or cops, but carts and knights instead. And magical creatures (the korrigans) and wizards as well.The reason for this is that the island once was torn away from the (real) mainland and now is stuck between our dimension (the Real World) and a pure Magical Land, the Uncertain World.

The 12-year-old Robin Penmarch is taken in as an apprentice to the sorcerer Quadehar because he shows an aptitude for magic. Soon afterwards, Robin receives serious threats from the Uncertain World and its evil Overlord, the Shadow. The Shadow lusts for Robin for unknown reasons. Robin and his four friends soon have to do incursions in Uncertain World in order to resolve mysteries.

The Lost Island is a Magical Land with modern comforts but no disadvantages from the Real World (such as pollution). Where else will sorcerers ever use computers? Add Robin's hilarious Five-Man Band and fascinating magic lessons, and you have one of the rarest fantasy books from a Romance-language country.

The three books are Quadehar the Sorcerer, The Mystery of Lord Sha, and The Face of the Shadow.

Not to be confused with The book of Stars