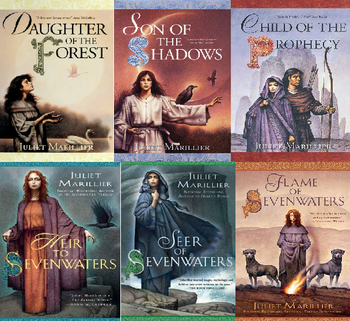 The Sevenwaters Trilogy is a series of Historical Fantasy novels written by Juliet Marillier. It is still commonly referred to as a trilogy, despite having more than three books, because the first books actually form a trilogy. The rest of the books are sequels.
Advertisement:

The books are set in a fictional version of 9th century Ireland and focus on the Sevenwaters family, the lords and custodians of a mystical forest. The books are written in first person from the perspective of young female protagonists and emphasize romance and family relationships.

The original three books skipped a generation between each book, with the overarching political story dealing with a feud between Sevenwaters and a British family, Northwoods, over the control of a group of mystical islands. While Marillier did not originally intend to write any further books in the series, they proved to be so popular that she eventually agreed to return to Sevenwaters for another three books. The later books begin shortly after the ending of the original trilogy, and are shorter and lighter in tone.