"Why do you descend?" 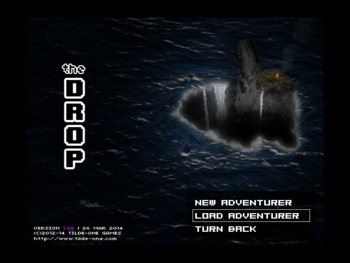 The Drop is a sequel to The Reconstruction, made by Space Lizard of Tilde-One Games

, with character art by Daigerus.

Five years after the events of The Reconstruction, society has begun to rebuild itself. But recently, something bizarre has happened: the Drop collapsed in upon itself, leaving a gaping, seemingly-bottomless hole in the ocean. Curious adventurers from around the world gather to see the depths for themselves. Early reports tell of a strong magical pervasion, granting even those unskilled in elemental arts the ability to wield magic, and of segments of land and even living creatures from other parts of the world suddenly appearing within.

Structurally, the game is a Roguelike, with the Body/Mind/Soul system and Elemental Rock–Paper–Scissors from The Reconstruction. There is a strong focus on environmental manipulation, as well — various environmental effects such as plants and water are spread throughout the floors, and can be manipulated for your benefit by using specific spells. Similarly, many enemies have special reactions towards spells with certain properties.

There are nine playable characters (as well as six Secret Characters unlocked by beating the game with the others), each with their own subplot and reasons for delving the Drop. Five are returning characters from The Reconstruction, four are newcomers.

It also has a trailer.

Has nothing to do with the 2014 crime drama starring James Gandolfini, Noomi Rapace and Tom Hardy.