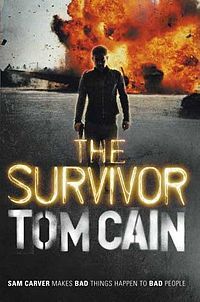 The Survivor (No Surivors in the United States) is a 2008 Thriller novel by Tom Cain, the second book in the Samuel Carver series. After the events of The Accident Man, the protagonist, Samuel Carver, is nearly catatonic in a Swiss hospital, trapped in his nightmares. Meanwhile, Waylon McCabe, a wealthy oil baron and Carver's only failed assassination target, has hatched a plan to spark Armageddon by acquiring a suitcase nuke and exploding it in Jerusaleum and Alex is pulled back into service with Russian espionage to foil his attempts. When Carver wakes up and realizes Alex is gone, he embarks on a quest to retrieve her and to foil McCabe.