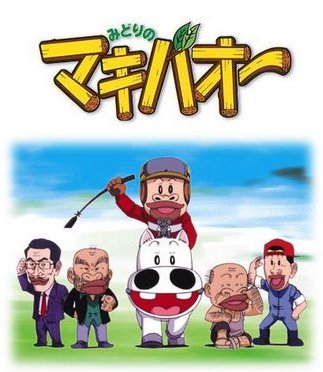 Look at all those Gonk!
Advertisement:

Midori no Makibao (みどりのマキバオー) also known as Green Makibao, The Incredible Race Horse, is a comedy Slice of Life manga series by Tsunomaru that was published by Shueisha (under Weekly Shonen Jump) and made into an anime by Studio Pierrot (yes, that Studio Pierrot) which ran on Fuji Television between 1996 and 1997. It is mostly unknown in the west due to its status as a Widget Series from its unusual combination of topic and target audience.

Makibao is a rather unusual racehorse, with a bodily build resembling that of a hippopotamus. However, when his mother was taken away due to bad debts, he must overcome his stocky build and enter the world of horse-racing to help his owners earn money to buy back his mother.

Never has there been such a series in the past, and from its popularity and strange premise, it's probably safe to say that there may not be anything else like it in the future.

The full series is up on Youtube somewhere, but don't expect it to stay up for long. On the other hand, Studio Pierrot probably wouldn't care less given the reception of the show.