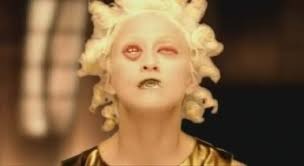 This is from the video for a song called "Bedtime Story". You probably already know the irony.

You don't become the Queen of Pop without causing some nightmares along the way.