Literature / The Shadow of the Wind 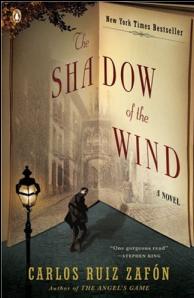 The Shadow of the Wind is a 2001 best-selling mystery novel by Spanish author Carlos Ruiz Zafón.

Set in Barcelona after the Spanish Civil War, the story follows Daniel, who, as a young boy, discovers a long-forgotten book in a secret library entitled The Shadow of the Wind by Julián Carax. Daniel tries to seek out other books by the author, but can find nothing and no information on Carax himself. Then he hears stories of a strange man calling himself Lain Coubert, the name of the devil in Carax's book, who is seeking out and burning all copies of the mysterious author's novels.

The novel became retroactively the first installment of the loose tetralogy known as The Cemetery of Forgotten Books, being followed by The Angel's Game in 2008.